Among the many things I love about living in Brooklyn is the Brooklyn Public Library system. It's huge; it's everywhere; they own just about everything that I could ever hope to find not in an academic library. And, more to the point, there's a branch four blocks from my house.

I went to the local branch with my ten-month-old son the other day. He crawled around in the toddler section for a while, pulling books off the shelves and arranging them in piles, and then fleeing the vicinity before he could be caught. At one point, I decided to take him and check out the world languages children's books section, to see if they had any bilingual board books that might work for our house.

My neighborhood (Kensington/Windsor Terrace) has a small Latino community, and large Russian and Bangladeshi communities, in addition to the working class Italian and Irish Catholics who traditionally lived in the neighborhood, and the newer, professional folks of all races who have been priced out of Park Slope. So, it's unsurprising that our library has a collection of books in Bengali, Russian, and Spanish. It's an added bonus that they have a small selection in Chinese, which is the third most spoken language in the city, and in Arabic. I have no idea why there is an Arabic collection--while there are many Muslims in the neighborhood, few are of Arab descent--but, after selecting a cute book about la granja (the farm) from the Spanish section, I decided to see if there were any Arabic kids' books. Not that I expect Xander, my son, to pick up any Arabic, but he'll see it around the house, so he might as well get used to what it looks like.

The Arabic section was, to put it kindly, a mess. I found a board book I had checked out of the Bay Ridge branch, Chameleon Races, which was, well, boring, but had pretty pictures. I also found several Bengali books miscategorized as Arabic--which is strange, because the two languages really don't resemble each other at all. There were some young-adult and children's books, but no board books, apart from Chameleon, which I'm done with.

But, sitting in the middle of the kids' section, I found this: 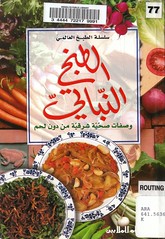 The title, for those who don't read Arabic, is at-tabakh an-nabaatiyy, Vegetarian Cooking. I'm a vegetarian, and have always found it easy to eat vegetarian in Arab houses and Arab restaurants, but I'd never seen an entire cookbook devoted to vegetarian Arab cooking, or one that used the word nabaatiyyy, which is what I would say if someone asked me if I wanted some chicken or fish or beef (la, shukran, ana nabaatieh, la a'akul lahm au dejaja au samak). So, I added it to the pile. 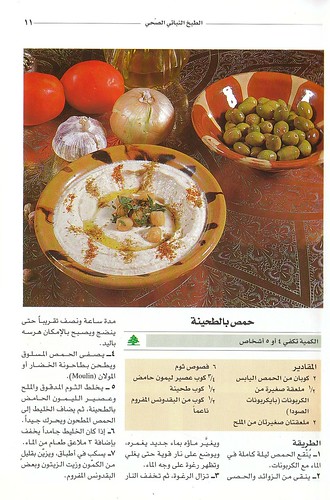 Possibly the most famous Arab dish in the west, which we call hummus. Hummus in Arabic signifies just 'chickpeas.' In fact, once, when I was teaching an ESL class to Arabic speakers, and introduced the word 'bean,' I turned to my Arabic-native-speaker co-teacher and asked, "How do you say 'beans' in Arabic?" and she answered "hummus." The dish we call hummus is called hummus bi tahini in Arabic--chickpeas with sesame paste. In any case, it's one of my favorites.

I think for many Americans, hummus is an introduction to Arab food. Perhaps you, like me, remember when hummus was a new, novel food, rather than something one could get at any grocery store in one of seventeen flavors. My mother and I discovered hummus in the early 1990s, and decided to try our hand at making it. Of course, we were living in the suburbs, and didn't have ready access to tahini. So, we compromised. We used peanut butter. (Today, I use this story when introducing myself to Arab-Americans, purely for the laugh it gets. I maintain that it was still tasty.)

I still make my own hummus, sometimes, since none of the flavors for sale at my regular grocery store satisfy me entirely. I have moved on from peanut butter, and keep a jar of tahini in the cabinet, along with dried chickpeas. My recipe is more of a trial-and-error thing than anything set. So, I was interested to see how it compared with this recipe, which, given that it was written in Arabic, in a book published in Lebanon, would seem to be tailored not to American tastes, but to Lebanese.

For your cooking pleasure, the recipe, roughly translated:

1. Soak the chickpeas the night before with the baking soda.
2. Pick over the chickpeas (remove stones and gravel) and change the water. Boil them until the water foams.
3. Reduce the heat, and let them cook for an hour and a half, until they can be ground by hand.
4. Filter the boiled and crushed chickpeas through a vegetable mill or a moulin.
5. Mix the powdered (crushed?) garlic, the salt, and the lemon juice with the tahini, then add it to the chickpeas and mix.
6. If it is too dry, then add two tsp water.
7. Put in dishes, and garnish with cumin and olive oil and some of the chopped parsley.

This differs from the way I've been making hummus in a few ways. First, I don't bother with the baking soda when soaking the chickpeas. This is supposed to soften the skins, but I don't find it to be a problem. I rarely pick over my chickpeas, though occasionally I do find a stone. I don't grind my chickpeas by hand, or use a moulin or mill; I use my blender, and just dump them in whole. In addition, I add quite a bit of olive oil before grinding the chickpeas. It's interesting that it's just a condiment in this recipe, added at the end.

I have a big tupperware of cooked chickpeas in my fridge right now, and have meant to try out the recipe. Alas, I haven't had time to cook, at any time before Xander's bedtime, lately, and I'm not stupid enough to run the blender with a sleeping baby in the apartment, no way. If I get around to it, I'll report back. Right now, I'm just flipping through the book, entertaining fantasies of carrot maqluba.